I’m happy to say that my preconception that Argentine farmers would operate low tech, livestock farming systems has been proved wrong – and actually British farmers may be a step behind.

In the last two days I’ve met a commercial beef finisher using satellite mapping to determine grass covers, budget feed and plan rotations. Another uses soil and yield mapping to decide where to plant specific crops in specific parts of the same field in order to get the best response.

It’s all about making the most of the conditions on the Pampas. They’re known as the prime beef growing area of the country with grass here seen as the best in Argentina. Generally, the warm environment and average rainfall of 850mm/year combine to create what the Argentines believe are the ideal, temperate conditions for grass-fed beef. British genetics – in the form of Aberdeen Angus and Hereford – are prevalent here due to their suitability to the climate.

Most of the grass is permanent pasture, with crop rotations on the better ground. Ryegrass is planted in some better ground, but is not common. It’s mostly fescues and native grasses. Compared to the lush pastures of the UK, these look like standing hay – although the region is currently in what some farmers say is the worst drought in 100 years (blog post to follow).

The typical grass of the Pampas region known for its beef production (above).

Soils vary hugely within relatively short distances, so understanding soil fertility on your farm is a hugely valuable tool, according to beef farmer Roque Cassini.

Roque runs five farms over 10,000ha in the south west of the wet Pampas region. He is the second biggest producer of breeding Aberdeen Angus, Braford and Brangus animals in Argentina (more on that later). I visited his main unit, La Cassina which is across 6,000ha.

The farm’s “hilly” ground, which is 2-3 metres above the rest, is sandy and low in organic matter, making it only capable of growing Lloron grass. However patches of ground in the same field are higher in fertility and able to grow crops like wheat, sorghum, maize, oats, sunflower and barley. In Argentina, oats, barley and wheat are seen as winter greens and grazed by livestock in July. Oats for example are grazed as a forage at about mid-calf height.

The low organic matter area on the left is only suitable for growing Lloron grass, whilst the patch next to it can grow winter greens for growing cattle.

To determine where to plant which crop, all of the five farms are soil and yield mapped. The farm managers then have yearly meetings to determine which crop should be planted where. It also enables fertilisers to be targeted effectively.

Granted, field areas are pretty large over here. The average at La Cassina is 80ha. However, Roque would happily plant 10ha areas with a different crop, within the same field and graze specific classes of stock on that area. He calls it “patch farming”.

Beef farmer, Nicolas Lafontaine is also trying to maximise use of grass on his beef farm where he produces beef for both internal consumption and export to the EU under the Hilton Quota.

He was part of a trial run by Buenos Aires University and ACREA – an independent farm discussion group – looking at the use of satellites to monitor grass covers.

Many of the farmers I’ve visited are part of ACREA. This is divided into regional groups and district groups of about 12 farms each. Farmer members visit each other’s farms and share and compare performance figures. 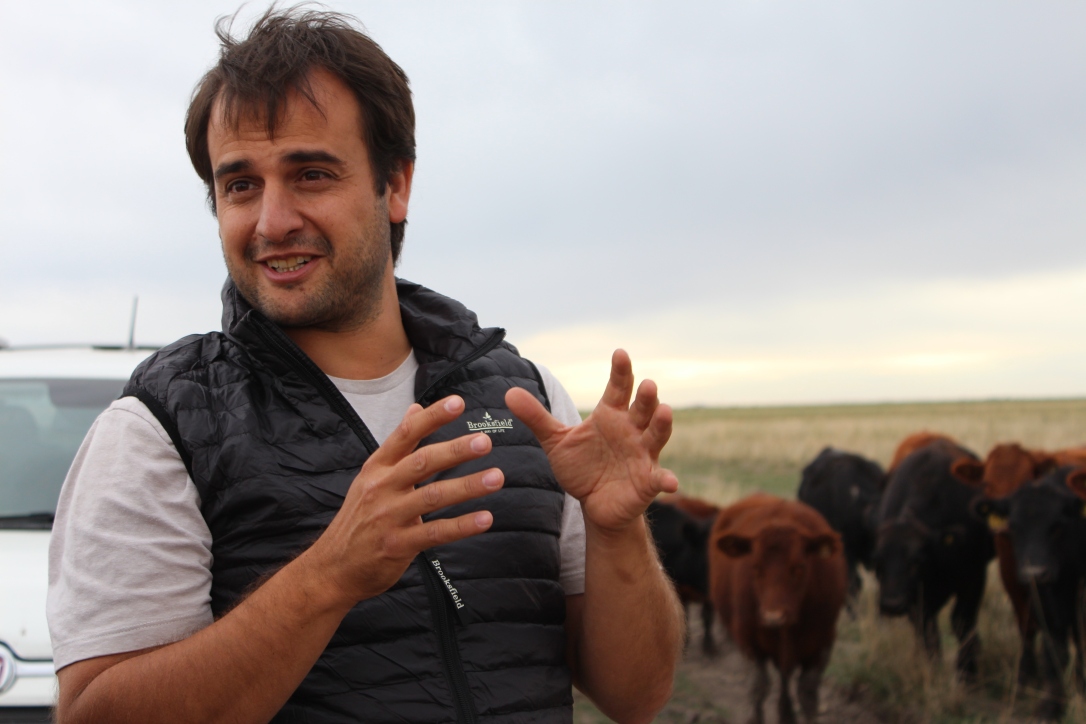 Nicolas Lafontaine is one of a number of farmers in his discussion group using satellites to monitor grass covers.

Nicolas is now using satellite imagery as a practical, day-to-day tool on his farm to plan rotational grazing. This is based on historical grass growth data from his farm which was collected in the seventies by his father as part of another trial. The programme uses this information, inputted data on current rainfall, and satellite information on how light is reflected off pasture, to predict grass growth and covers. Nicolas can then plan where to graze different classes of livestock depending on grass growth.

Nicolas is also one of a number of beef farmers trying to raise production of permanent pasture by applying fertiliser and over-seeding grasses (all Argentinian farmers operate no-til). After several years of politics which made beef unprofitable, many producers pulled back on investments. However, with the new government making positive moves to support farming, farmers are starting to gain confidence.

Nicolas has conducted trial work to establish the benefits of applying fertiliser to permanent pasture and recorded a 15-20% increase in yields from applying urea and DAP.

The government is also backing technological development across all aspects of agriculture. The National Institute for Agricultural Technology (INTA) has a handful of research centres and 54 experimental farms located across the country. Each farm focuses on conducting research which is relevant to farming systems in that region, whether that’s crops, beef, fruit or forestry. Farmers are the key drivers behind which topics are investigated, with most of the research farms run as commercial, money making enterprises.

All-in-all, it’s pretty impressive how Argentine farmers are embracing technologies to help maximise performance in what can be challenging conditions. Soil mapping and precision farming is only just starting to be talked about by British livestock farmers, whilst – as far as I’m aware – the use of satellites to assess grass covers is only in the trial stages. Perhaps we have a bit of catching up to do!

I'm a freelance farming journalist specialising in livestock production. I've been an ag journalist for 12 years - four of which were spent at Farmers Weekly magazine as Deputy Livestock Editor. I now live in the South West of England and spend my time reporting on technical livestock matters for GB farmers. Having been awarded the GAJ Perkins Innovation Scholarship 2017, I travelled to Argentina in April 2018 to learn about beef production systems and documented my findings on my blog. View all posts by Aly Balsom